In this video interview, Dr Ripal Gandhi (Miami Cardiac and Vascular Institute, Miami, FL, US) presents an interim analysis of the RESCUE study - a prospective multicenter trial evaluating the efficacy and safety of the BASHIR™️ Endovascular Catheter device in patients with pulmonary embolism. Originally presented at the International Symposium on Endovascular Therapy (ISET) 2022, early findings show a 90% reduction in occluded segmental pulmonary arteries with the use of this catheter.


Importance of this study


So the study that we are talking about is the RESCUE study, and the RESCUE study is specifically assessing the safety and efficacy of the pharmacomechanical catheter-directed thrombolysis utilising the BASHIR Endovascular Catheter in patients with intermediate-risk acute pulmonary embolism. And it's really a multi-center single, I'm sorry, multi-center prospective single-arm clinical study, which specifically includes patients with pulmonary embolism of 14 days or less, but a proximal pulmonary embolism and an RV/LV ratio of greater than 0.9. And the primary efficacy end points are really reduction in the RV/LV ratio at 48 hours, and the primary safety endpoint being any major bleeding or device-related adverse events at 72 hours. And what I'm what I'm going to be presenting is really the pre-specified interim analysis of the RESCUE Trial, which really includes the first 61 patients, I believe. And basically, the primary results of the study are here, and the number one is the reduction of RV to LV ratio and the reduction to the thrombus burden. Both of these were presented by Dr. Sista at the VIVA meeting last year, but I'm going to be re-presenting that as well. And basically there has been a 32.1% reduction in the RV to LV ratio at 48 hours, there is a 36.3% reduction in the reduction of thrombus burden as measured by a modified Miller index at 48 hours. And there were no major bleeding or device-related adverse events. The newer data that I'm presenting, which has not previously been presented, is that there's a 90% reduction in the totally occluded segmental pulmonary arteries and a 72% reduction in the total and subtotal occlusions of segmental pulmonary arteries. Which is quite remarkable, especially when you consider the actual amount of thrombolytic which was given, which is relatively low. The mean number of occluded segmental pulmonary arteries per patient actually decreased by 72.5% as well. So those are really the key findings of the interim analysis so far.


The BASHIR™ Endovascular Catheter is a pharmacomechanical device that's really dedicated and designed for the use in large vessels. So a lot of the thrombolytic catheters that we utilised are not really designed to treat a vessel very large like the pulmonary artery. But this device is a 7 French device and when you expand the basket, it has a maximum diameter of 45 millimetres. So it actually can really get, it really creates, when you expand this basket, multiple fissures within the thrombus, and this really allows for, number one, immediate restoration of blood flow, which is extremely valuable. You have wider cross sectional distribution of thrombolytics as well as endogenous lytics. It's easy to utilise and you have no blood loss. And the potential implications here are that you have reduced duration of therapy, reduced doses of thrombolytics, decreased rate of major bleeding events, and better efficacy hopefully as well. There are actually 48 infusion holes on the actual BASHIR™ Endovascular Catheter.


The key findings in the interim analysis, as I mentioned previously, are really four or five major points. Number one is a reduction in the RV/LV ratio of 32.1% at 48 hours. Number two is a reduction in the thrombus burden of 36.3% at 48 hours as measured by the modified Miller index. Number three, in terms of safety, there were no major bleeding or no major device-related adverse events. Number four is that there was a 90% reduction in the number of totally occluded segmental pulmonary arteries, and a 72% reduction in total and subtotal occlusions of the segmental pulmonary arteries. And finally, if you look at the mean number of occluded segmental arteries per patient it decreased by 72.5%.


So really the take-home messages is that the BASHIR™ Endovascular Catheter really met its, again, in the interim analysis, we don't have the final results yet so I do want to keep that in mind, the study is supposed to enrol about 100 patients and we're about, I think about 92 patients so far have been enrolled. So we don't have the final results yet, and hopefully the enrollment will be completed within Q1 of 2022. But I think the important things to me in looking at this study is that the reduction in the thrombus burden at 48 hours after treatment, as assessed by independent Core Lab, is really remarkable, as for most patients, we gave only 14 milligrammes of TPA. And there were some patients we only gave seven milligrammes of TPA if there was only a single pulmonary artery which had significant pulmonary emboli. And there were no bleeding complications. And the significant reduction, the 90% reduction, for example, in the number of totally occluded segmental pulmonary arteries, as well as this 72% reduction in the total and subtotal occlusions by 48 hours, is really striking and has never really been reported with any other treatment modality. So the restoration of pulmonary artery blood flow really should be an important goal of treatment. And a lot of this really hasn't been shown and has actually been ignored in some of the clinical trials for catheter-directed treatment of acute pulmonary embolism to date. And the expandable infusion basket of the BASHIR™ Endovascular Catheter with it's really primary mechanism, mode of action really helps to restore blood flow very quickly. And the ability to deliver even small amounts of TPA can really result in a remarkable improvement in blood flow relatively quickly and very safely.


Well I think in the pulmonary embolism space, there are many things that we don't know, and this really makes it an exciting area for a lot of us who are involved in this space. When we look at treatment of pulmonary embolism, we're probably decades behind compared to treatment of acute coronary syndrome or peripheral arterial disease, for example, or even venous disease, so there's so much we don't know. But some of the things that I would like to see in future studies, we have a lot of different endovascular therapies, but we still don't know the exact patient population is best treated with endovascular therapy versus anticoagulation alone, and there are randomised clinical trials which are currently underway to evaluate that. If we don't know when we're actually doing an intervention, we don't know is catheter directed thrombolysis better or is mechanical aspiration better, or are there a subset of patient population where some patients are better treated with catheter-directed thrombolysis and some patients are better treated with mechanical aspiration? That's going to be evaluated in the ongoing studies as well. Finally, we don't even know what the best study endpoint is. We're looking at some of these surrogate endpoints, I would call them, but what are the best endpoints? And there are going to be future studies underway, hopefully there's a PE-TRACT study, which is an NIH sponsored study, which hopefully will get funding, which is going to be looking at completely different endpoints. They're going to be looking at peak oxygen consumption at three months as well as New York Heart Association class at one year. So I think that's going to be very valuable, as it's really going to be looking at longer-term exercise tolerance, functional capacity, as well as quality of life. So I think this study, this PE-TRACT, if it hopefully gets funded, clinical trial which is known as HI-PEITHO, which is going to be comparing anticoagulation alone versus catheter-directed interventions, and there's another randomised clinical trial called the PEERLESS, which is going to be randomising patients to catheter-directed thrombolysis versus mechanical aspiration with a large-bore FlowTriever device, all of these are going to be very important studies which will help better our understanding of pulmonary embolism, better our understanding of patient selection, and hopefully improve outcomes for patients, not only in the short term, but also in the long-term.

TCT 22: FLASH Trial: US Outcomes of the FlowTriever for PE 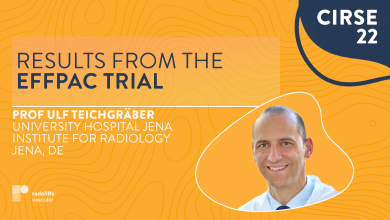 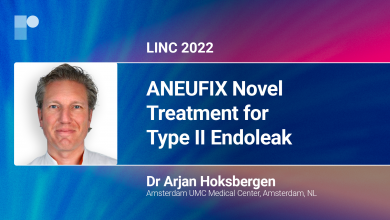 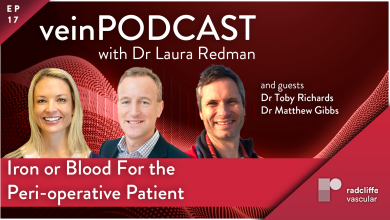 Ep 17: Iron or Blood For the Peri-operative Patient